Ricky Gervais, love him or loathe him, his latest comedy series Derek is wonderful. Derek is so good the TV show has been renewed for a second series.

While The Office was unique for its fake documentary camera style, at times it was difficult to watch as it just makes you grimace. Extras was great for a bit of celebrity spotting. The Ricky Gervais Show was cleverly animated and kept you up to date with monkey news. An Idiot Abroad is a hilarious road trip with Karl Pilkington at his observational best. Life’s Too Short was fantastic slapstick with Warwick Davis mastering it perfectly, and it was an excellent satire on celebrity ego.

Derek however is different. It’s clever, sweet, and at times touching. Why am I getting teary watching a comedy drama? I’ll admit I was confused by the first episode. I didn’t know if I wanted to get on the Ricky Gervais train to Derek in case it dropped off a huge cliff in the second episode. But every episode Gervais surprised me.

I was dreading another elderly person passing away, the retirement home being shut down, and Derek not being able to save another bird. The best kind of drama seeps into your psyche making you believe in the characters and the pathos shown on-screen. Kerry Godliman deserves the bulk of the credit, she is superb as Nurse Hannah. I want to volunteer to help her out in the home she is that believable as a character.

Karl Pilkington is also a gem as resident handyman and caretaker Dougie, and as always he has the best lines. The ceramic frog moment shared between Derek and Dougie is the best routine since Abbott and Costello’s Who’s on First?

Derek’s mate Kev is the resident sleaze and crass joker played well by David Earl. The supporting cast of elderly residents are also joyful to watch.

The character of Derek Noakes has been perfectly honed in live shows over the years by Gervais. It shows. Gervais plays Derek so well you’ll forget why Dustin Hoffman won an Oscar for Rain Man. Gervais has said that he has drawn from what he knows to write the series Derek, as many members of his family are care workers.

Derek is one of the best shows to be made in the last decade. Congratulations, Mr Gervais on creating this masterpiece.

I’m looking forward to series 2 of Derek. I’m also stocking up on tissues.

Derek is currently being repeated on ABC2 in Australia, is available on Netflix, and on DVD/Blu-Ray. 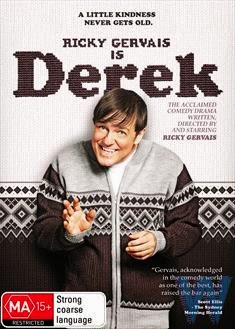 I am a noisy noodle hailing from Melbourne, Australia who loves listening to noise in all forms, but preferably in music, TV and film. I’ve moonlighted on community radio at SYN-FM many years ago when I was still a “youth”. My mission is to promote live music (get off your bum and see something!), highlight interesting TV shows that are ignored by the ratings, expose some cool films and to not go deaf trying!
View all posts by noisynoodle »